This painting is best described by the Forbes Library’s website located in Northampton, MA: In 1927, President and Mrs. Coolidge had a busy summer in Rapid City, South Dakota, a part of the country unfamiliar to both of these Vermont natives. It was here that he received a Native-American warrior’s headdress now displayed at the Calvin Coolidge Presidential Library and Museum (CCPLM). Coolidge was president in 1924 when citizenship was granted to all of the native population. A local Boy Scout troop presented him with a cowboy outfit complete with hat and chaps. In early August, the president delivered his famous one line news release that startled the nation by saying, “I do not choose to run for president in 1928.” Lesser known today is that Frank Clifford Ashford painted two portraits of President Coolidge and two portraits of Grace Coolidge that summer at the State Lodge in Custer State Park where they resided. Two of the artworks hang at the CCPLM, one of the president in the Native-American headdress and the other, a profile of the first lady in a red dress. The other two works remain hanging at the lodge where they were originally painted. In those, the couple [Mr. and Mrs.] is in more formal dress.

This is an excellent example of Ashford’s ability to infuse basic colors, white, black, Caucasian skin with a myriad of other colors to emphasize texture and depth. Signed, Ashford and the size is unknown. 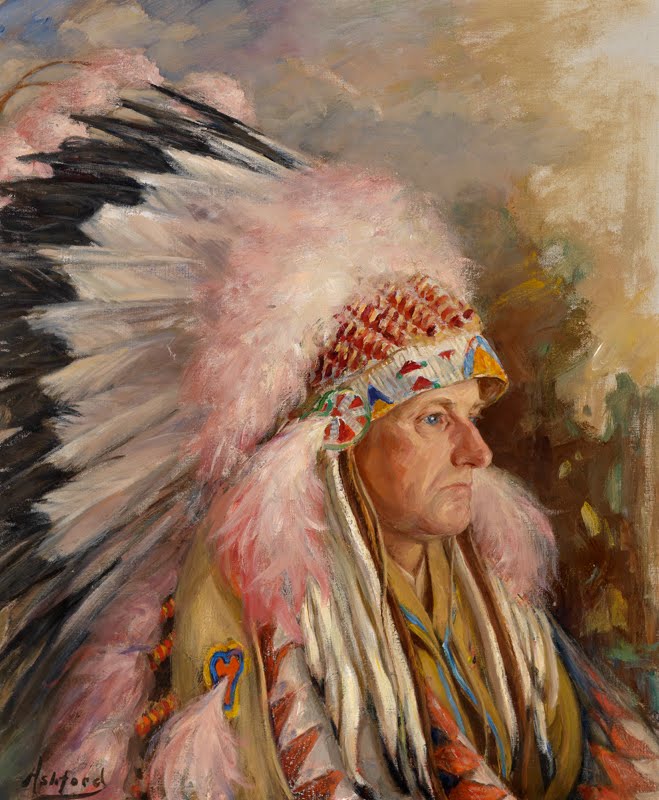